I don't know why I haven't posted in so long.  I feel kind of overwhelmed by everything, and then I yell at myself for feeling overwhelmed when so many others are way busier and have way more demands on their time than I do.

I went to see Mom for my birthday.  The new place she's in seems pretty nice.  It's weird to think of people being paid to take care of my mother, but they all seem very kind and good at what they do.  And it doesn't seem to bother Mom at all, I think she likes having people take her to the dining room and bring her medication to her and give her baths.

They have several model apartments that are furnished in such a way as to give the impression that someone lives there.  They let me stay in one right down the hall from Mom and didn't charge me anything, so that was cool.

My model apartment had a twin bed and a lift chair.

There was a dresser at the end of the bed with a tv on it and this DVD player/VCR combo dealie next to it.


And in the top drawer was this.  Romance, WWII, and westerns. 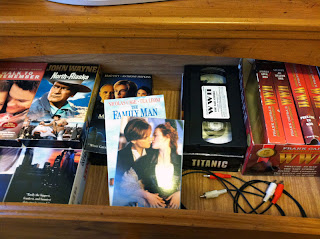 It was a little weird to sleep alone in a tiny twin bed, but I had my Kindle and Roseanne was on tv, so it was okay.
The whole place is supposed to look like "home".  Each apartment has a mailbox outside the door, and Mom checks hers several times a day - apparently they get to the mail delivery when they can, but it's at different times each day.  Mom doesn't get much mail.  She gets postcards from my friend here in FL, but my sister took over all her finances when she moved, so she doesn't get all her various statements anymore.  I try to send her a card at least once a week or so, but most days she doesn't get mail. 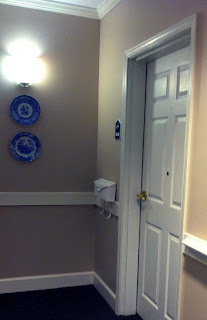 The dining room is pretty nice, and the food was mostly really good.  It's weird after the place Mom used to live, with its big dining room and dozens of people, to be in a relatively small dining room with only eight or ten other people.

They print up menus every day, with several different food options for each meal.  Mom orders whatever she wants, and always tells them to "just bring a little bit".


On my birthday my sister and her husband took us out for lunch the Village Tavern restaurant.  Mom and I shared the salmon.  It was the first time that Mom has been out since she moved into this new place at the end of January.

Mom really does seem to be doing fine there.  The only thing I worry about is that she doesn't have any friends, and there are just not very many people for her to pick from.  She has meals most days with a chatty, cheerful lady named Marion, a 98-year old well-dressed lady with red lipstick and pink nail polish and a very strong southern accent.  She's nice, but she and Mom are not friends the way Mom was friends with Mickie and Wilma and Marie back at the other place.

This assisted living home has a large area, completely separated from the part where Mom lives, that is dedicated to Alzheimer's patients.  Mom had been curious about it, so when I was there I got permission to go in and we gave ourselves a little tour.  Except for being behind a locked door, it was pretty much the same as the part Mom lives in.  Well, there was one thing that gave me a bit of a pang; in one corner was a crib filled with baby dolls.

Mom's apartment is nice, although much smaller, it's really a studio instead of a one-bedroom.  She seems very comfortable in it, though.  She had a nice view before, and now she has a view of a steep slope with some landscaping right outside the window, and on the top of the hill is a McDonald's drive through.  It's not exactly awful, but it's not pretty, either, and she can't see the moon anymore at night.

I have taken to calling Mom twice a day, one quick call in the morning and one in the evening.  She has started saying that she loves me at the end of every call.  We used to say it sometimes, but only rarely, on especially emotional occasions.  I like it, and I like telling her that I love her too.

Tell me what you think!