For the past few years I have made calendars for Mom for Christmas, using old family photos. She loved them, and the family got a kick out of looking through them for pics of themselves. I'd try to have several photos of everybody, and put them with the month of their birthday. I put the Christmas photos with December, etc., and it was fun to put together.

Fun, but time consuming. Ever the Photoshop-savvy perfectionist, I'd have to make sure all photos were color balanced, cropped attractively, and adjusted so that the bright/dark levels and color saturation all matched. Then I'd make a background, and add drop shadows. The end result was awesome (if I do say so myself) but took for-freakin'-ever. Every year I'd start thinking about it in September and resolve to get started soon, and every year I'd actually get going on it around the middle of December. 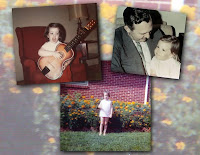 That's me as a small child, March from the second calendar.  How cute am I?
By that time, my printing options were minimal. It was too late to send away for it and get it back in time. That eliminated everything but local printing places like office supply stores and Kinko's (every photo processing place I called took too long also, as they shipped it out as well).

So the first year I took it to OfficeMax. I brought in a cd with carefully labeled jpg files, and they had it done in a few hours. But it looked... kinda icky. My carefully restored images were disappointingly dull. Then I noticed that the wall calendar didn't have any hole in it. They seemed surprised that I'd want one (!!) and told me they could punch a hole in it for me, but it would take more time. I told them no, and took it home and used a hole punch to do it myself. Stupid non-hole punching crappy printer place.

Even though I thought it looked icky, Mom loved it, so all was relatively well.

The next year I waited too long again, and, remembering the ickiness, went to Staples. It was basically an identical experience, right down to them not punching a hole. What is that about? How else are you going to use a wall calendar? That's why it's called that, because you hang it on the wall! I cursed both Staples and OfficeMax, and resolved not to ever get anything printed there again.

This year, Mom mentioned several times how much she loved going to Leu Gardens, so I decided to switch it up and make her a Leu Gardens calendar, using photos I had taken there. This year would be different; instead of spending so much time making backgrounds and arranging multiple photos for each month, I'd make it easy and just do one photo per month, using one of those photo printing sites that provides a template. All I'd have to do would be upload 13 photos (12 months plus a cover) and I'd be good to go.

Armed with an awesome coupon code for a huge discount, I picked my best photos, and started uploading. Right away I had trouble with the template, the proportions of the photos I was using didn't fit, and the site was trying to crop out the excess in ways that ruined the pictures. I went back into Photoshop, cropped them myself, and re-uploaded. Then I kept getting messages that my file sizes were too big. Back into Photoshop, reducing file size. Then I got error messages from the site that my file sizes were too small!

Yadda yadda yadda, the next thing I know I've spent far more time than ever before on the calendar, I have nothing to show for it, it's mid-December, and time has run out. I shake my tiny fist at the sky and REFUSE to go back to a crappy non-hole-punching office supply store, and sadly head out to Kinko's.

I had planned to get two copies made, one for Mom, and one to hang up at my desk at work. I was looking forward to people stopping by my cubicle and exclaiming over the extreme gorgeousness, whereupon I would modestly say, "Why, thank you, I took those photos myself". But Kinko's was too expensive, so I decided to just get the one for Mom.

I dropped off my cd, and went back the next morning to pick up the calendar. It looked exceedingly icky, even worse than the ones from the stupid office supply stores. The person working there agreed, and offered to print another one, but there was no time left, so I just said never mind. They actually gave it to me for free, saying they would just have to shred it; so I took it, since the idea of them shredding my photos was kind of sad.

My husband thought it looked pretty okay, kind of, so I decided to go ahead and give it to Mom. Being a sweetie, she told me at length how much she loved it and how beautiful it was. So, I guess it made her happy, so that's good. It's not as beautiful as it could have been, for sure, but whatever.

Then! The second week of January, Mom and I were having our nightly phone call, and we got confused about what the date was. Upon further investigation, it turned out that the stupid Kinko's calendar was not only ugly, but WRONG. It said 2010 on it, but they had used dates from 2009.

I am filled with righteous stabby anger, and the worst part is, I feel like it would be relatively useless to complain, since they gave it to me for free! I don't have a receipt, I can't even prove they printed it.

Mom says she doesn't care, she has other calendars to use for looking at dates, and she still loves having my Leu Gardens photos on her wall, so I guess I will let it go.

I kept thinking about how nice it would be to have my own calendar, though. Maybe I could still make one for me, to put up at work! It wouldn't have to be done by a certain date, so I'd have lots of time. I could use my own photos, or I could use images of things I like. Maybe I could have a Death Proof movie poster for one month, and a David Bowie album cover for another month, and a sexy pic of Eric the viking vampire from True Blood one month...

Yadda yadda yadda, busy busy busy, and all of a sudden it's late February and my husband is calling me from a Books-A-Million. He says I've been talking about calendars for months, needing one at work and not having one, all their 2010 calendars are $1, do I want one? Oh, fine. Do they have a Marilyn Monroe one? No. Harry Potter? No. Arty photos of France or Italy? No. Nuns Having Fun? No. Monet? No. Fuzzy kittens or cute puppies? No. They do, he tells me, have a Twilight movie one. Oh... fine! I say, giving up completely.

This year, I SWEAR I will get started in September... maybe August. Oh, the multiple low-stress printing options I'll have. Oh, the 2011 calendar joy that will abound!
at March 11, 2010 No comments: