I really didn't want to get up too terribly early on my birthday, but I knew that Islands of Adventure and Universal Studios would be crowded with spring breakers, so to be kind of in-betweeny we ended up getting to the park at around 10am.  (This time I listened carefully to make sure Greg locked the car.) 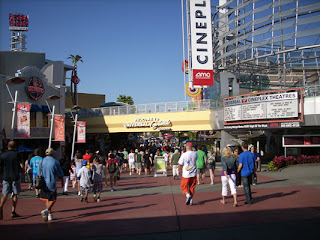 It was an absolutely gorgeous day, bright yellow sun and blue cloudless sky, with a high in the mid-80s.  We walked straight to IOA to pick up my passes at the Guest Services counter.
The nice Guest Services lady also gave me an "It's My Birthday" pin to wear, which netted me several Happy Birthdays from employees and random strangers, one employee in WWoHP singing Happy Birthday to me, and an unauthorized discount on one purchase (I won't specify, just in case it really was as unauthorized as he (or she!) said it was).
Having done advance research on crowd levels at WWoHP (the Orlando Informer site was particularly helpful) I knew that it would be at or near capacity and that we would probably be getting a return ticket.  My hope was that we'd get a return ticket for around lunch time, so we could have fish and chips at the Three Broomsticks.  We had to go there first and hope for the best, though, because once all the tickets were handed out, that was it for WWoHP for the day.
Sure enough, WWoHP was already closed off, but we got a return ticket for 12:40.  Sweet! 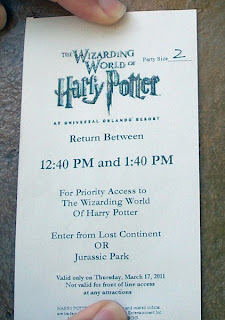 We wandered around IOA, taking pics and riding rides (I love the Spiderman ride). 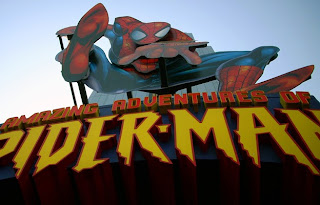 At one point, a woman in the crowd randomly turned to Greg and asked if we wanted two Meal Deal tickets, she said they had two extra that they couldn't use.  Greg said sure, thanks!! and we went off to find out what the heck a Meal Deal ticket was.  A lady at a customer service dining kiosk took our two tickets and gave us both Meal Deal wristbands and a map showing the three restaurants where we could eat free.  Not surprisingly, Three Broomsticks was not included in the plan.  Still, pretty sweet!
At 12:30 we headed back to WWoHP.  Even with the restrictions, it was tremendously crowded inside. 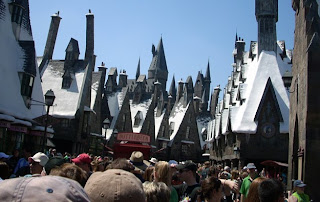 Even the stores had long lines to get inside. Hungry and getting hot, we went straight to the Three Broomsticks, only to discover there was an hour and a half wait.  Forget it, we decided to just go eat free somewhere else.
My two big priorities were to get a frozen Butterbeer in the cute souvenir mug I'd regretted not getting last fall, and to do the walk-through tour of Hogwarts.  We made our way through the crowd to Hogwarts and explained we just wanted to do the tour and not the ride, but somehow once inside we ended up getting in the wrong queue and suddenly we were trapped in the middle of a tightly crowded area.  We managed to get out and thought we were back on track but then once again ended up squeezed in with a group inside a small confined room, and Greg's claustrophobia kicked in.  Looking for an exit, he went out through a small metal gate outside, and whew! we were out of the crushing crowd.
But then I looked up, and realized we were not just out of Hogwarts, we had come out in a whole different part of the park.  We were no longer in the Wizarding World at all, we were not even anywhere near the entrance.  We had had to give up our ticket to the WWoHP when we went in, so we had nothing, and no way to get back in.
I panicked a little.  Should we go back and try to get another ticket for later in the day?  What if they had already given out all the tickets, and we were too late?   We wandered away, trying to decide what to do.  I'm only slightly embarrassed to admit that I got a wee bit teary.
Greg, seeing my eyes well up, went into Save Ellen's Birthday mode and grabbed my hand.  Leading me back to the place where we'd exited, he pried open the metal gate and in we went.  He walked straight up to an employee standing nearby and explained how we'd gotten lost and then accidentally ended up going out the wrong exit, and she led us back into the main area and put us in the correct queue.  The next thing I know we are in the deserted "tour only" line, standing in the Portrait Gallery.  Whew!
After a leisurely walk through Hogwarts, we bypassed the extremely long lines of people standing in the hot sun to buy Butterbeer and ducked into the Hog's Head pub.  We waited for a few minutes behind a half-dozen people, but clearly it is not general knowlege that you can buy Butterbeer there.  We had a nice wait in the cool pub, looking through at the attached Three Broomsticks restaurant (glad we didn't wait for it, it looked uncomfortably crowded), then bought my frozen Butterbeer with the adorable souvenir mug.
We just stood inside the main gate for a while, looking around.  The Wizarding World still amazed me.  Not only is it so perfect in every detail, not only is it all about being an actual representation of Hogsmeade/Hogwarts (as opposed to being all about the characters, with costumed Harry Potters and Voldemorts walking around, which would be so cheesy and lame), not only is it just so realistic that it literally takes my breath away, but it is all a physical representation of a book.  I love books, and I love the fact that some people loved some books so much that they actually built them, physically.  Imagine such a thing.  It's beautiful.  :) 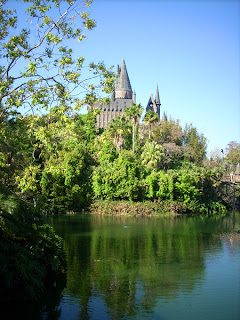 So we left.  We found one of the Meal Deal restaurants and had an extremely mediocre but free lunch. 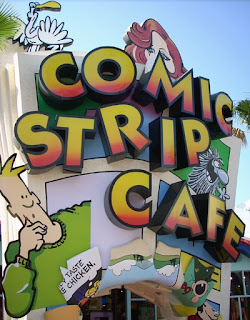 After lunch we walked to Universal Studios and spent a lovely afternoon wandering around and drinking lemonade.
﻿Overall, I had a great birthday!  :)
at March 24, 2011 5 comments: