We went to Screamfest (horror convention) yesterday. Greg's favorite movie EVER is the original Texas Chainsaw Massacre. Not the remake, mind you, the original; Greg was relatively offended by the remake. TCM (as obsessed fans refer to it) starred Gunnar Hansen as Leatherface. Guess who was at Screamfest signing autographs? THAT'S RIGHT! Greg was VERY EXCITED!

Here is Gunnar autographing a particularly gross 8x10 for Greg, which will soon be up on our wall (oh, joy): 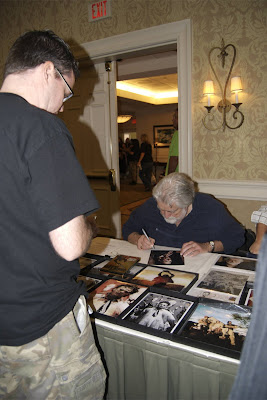 Here is Greg with Gunnar: 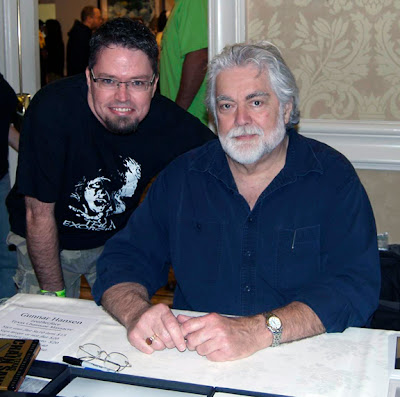 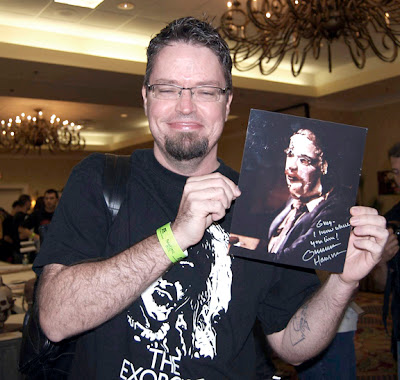 See the picture that Gunnar signed for him, with the droopy skin and bloodiness? That's the "Pretty Woman" mask (as TCM fans call it), where Leatherface had on his mask made from his victim's skin. TCM was very loosely based on Ed Gein, a serial killer in the 50's. He murdered several women and dug up the recently buried bodies of several others, all of whom looked a bit like his mother, and made clothing out of their skin. The Buffalo Bill character in Silence of the Lambs was also loosely based on Ed Gein.

Who wants to bet that I know more horror movie trivia, relative to the amount of horror movies I have actually seen, than anyone, EVER? :)

Here's Greg with some stray freak (there were plenty of them wandering around the Wyndham): 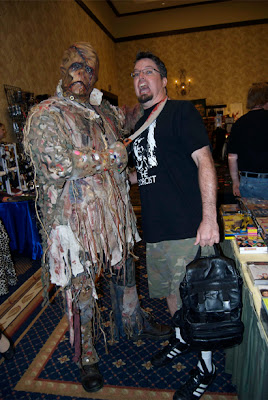 I bought some really cool stuff, too, including this SCARY necklace: 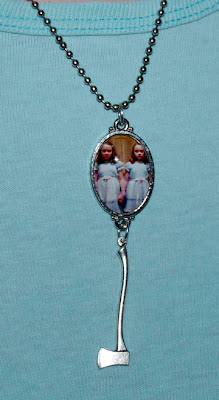 I love The Shining, it's one of the few really scary movies I have actually seen and enjoyed. The book was so good, I just had to give in and watch the movie. It's not quite as good as the book, but movies rarely are. I don't know if being scary is a good trait for jewelry, but I fell in love with this creepy necklace.

And I bought this little painting: 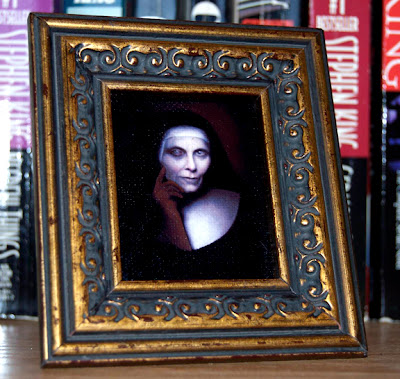 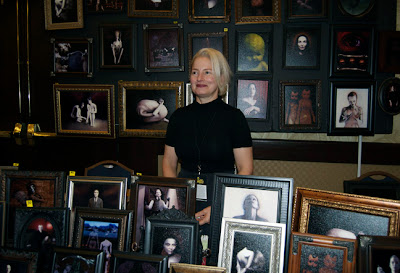 How cool is this chick? I loved all her paintings, but settled on just buying one small one. I plan to put the painting somewhere in our newly organized library, I haven't decided where yet (in the picture above I put her in front of several scary paperbacks... ooOOoo). You can see more of her stuff here:R. H. Phister, and if you want to buy me a fabulous present for Christmas this year, you could get me one of these. Especially if you happen to be married to me... That's a HINT.

We also ran into our friend Gary, from the Just Push Play podcast. 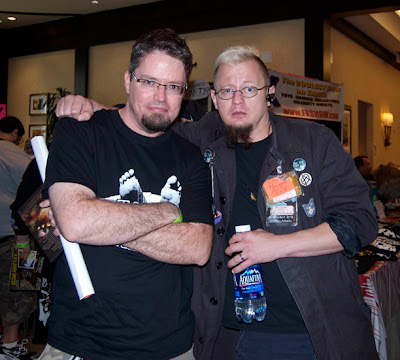