The Last Harry Potter Movie, Ever

The tickets were for the 12:20am show, so we got to the theatre a little after 11pm, expecting to wait in a long line.  Walking up to the theatre we saw very long lines of people waiting outside, and when we went in we saw people sitting along every wall in the lobby and in the hallways, waiting.  We walked up to the ticket taker guy and gave him our printouts, and he said our theatre was already open and seating.  Woo hoo!

The theatre was around 80% full when we walked in, but we managed to find two aisle seats near the back, and had a great view.  The one thing we were worried about was ending up in the front row, there's just no way to watch a movie from under the screen without ending up in pain.  We got some popcorn and a coke and settled in, and the hour+ wait seemed to go by pretty quickly.

The crowd seemed to be mainly college students, which makes sense because we live near UCF.  There were a couple of people in costume and many people in Harry Potter t-shirts, but the majority just wore the Florida college student uniform: t-shirt, shorts, flip flops.  While we waited I quizzed Greg about what horcruxes had already been found, which had been destroyed, and what the Deathly Hallows are.

I wore my Death Eater logo t-shirt, which I did feel slightly guilty about.  I am clearly not rooting for Voldemort, but you have to admit the Death Eaters have a very cool logo.  To counteract any appearance of Dark Lord sympathy, I also wore lavender nail polish with a thin layer of pink glitter, in honor of Luna.

At only two hours and five minutes long, the movie is one of the shortest (taken by itself), but I thought it did a pretty good job of including everything.  I knew there would be things they would leave out, it's happened every movie and I am numb to the injustice of what they choose to cut, but overall I really, really liked it.

Also, great googly moogly, when did the kid who plays Neville grow up and become suave and handsome?  Behold little Neville and his pet toad Trevor: 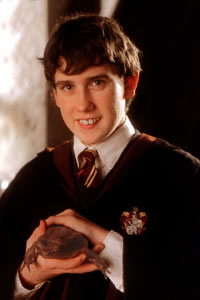 How is that kid now this guy? 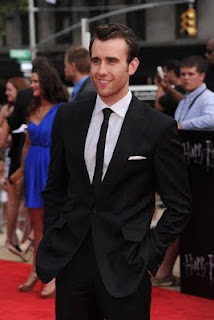 Also, Greg and I discussed briefly going to see the movie at Citywalk at Universal, just because I knew it would be bigger and more awesome in general.  We decided not to, because it's a lot farther away from us and we knew we wouldn't want to walk a mile back to our car and then drive 30 minutes to get home at 3am, because we are old and lame.

Wow, that was a mistake.  When the movie ended at Citywalk, the moviegoers got to go to a special event: Universal opened up the Wizarding World until 5am!  Free!  Everything was open, all the rides were running, it was a celebration of the final movie!

Here is the video of the event on YouTube.  Well, no point in beating myself up for not being there, but holy crapmuffins that looks like it was amazing.