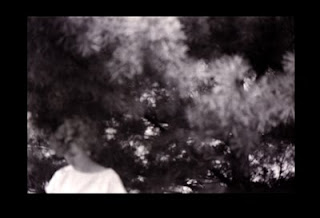 Here's another photo that I took in 1985? 1986? and never bothered to print, since it's blurry and obviously a mistake.  But looking at it now, I think it looks dreamy, and I kind of like it.

This is my friend's sister, the one I found on Facebook a few months ago, but I still can't get her to answer me when I ask about where/how my friend is.  I also still haven't ruled out her being too unfamiliar with Facebook to know how to use it correctly, since it's clear she only logs in every couple of months or so.   Hopefully that's the problem, and not that there's bad news.  Recently another childhood friend was here in Orlando visiting, and she told me that the last time she saw our unfound friend was in 1990, and the friend appeared to be paranoid; she was acting strange and said that she was afraid she was being followed.

That's certainly odd, and combined with her absence, somewhat concerning.  I've been thinking about her today especially, it's her birthday.  I always remember when Flag Day is, because of her.  :)

Hopefully she is just technologically awkward and not online, but still completely fine.  Hopefully one day her sister will answer my messages on Facebook and then my friend and I will be back in touch.
at June 14, 2010 3 comments: