This blog entry was inspired by my dear friend Angella's recent blog entry about her discovery of the amazing world of photo-editing programs.


I used to be a digital artist.

Funnily, the self-hating voice in my head didn't want to let me type that, it wanted me to type "I used to consider myself a digital artist."  Be quiet, stupid voice.  I really was an artist.

Back in the early 90's my then-boyfriend brought home a Mac, with a very early version of Photoshop.  I had been laid off work and had nothing better to do than play around with it.  The fact that we didn't have internet access may have played a big part in the time I dedicated to Photoshop.

I am also very sad and ashamed to admit that the very first photographs I played around with were photos of a co-worker that my then-boyfriend had taken of her, naked, in our house, before he cheated on me with her.  Why am I sad and ashamed to admit that?  Because what the fuck was I still doing with someone who cheated on me, in our house, then kept the naked photos of her, then put them on our computer?  Gads.  Everything is a process, I learned a lot of valuable lessons, etc etc etc.  Ugh, though.

I was not very happy back then.  I took the photos and did horrible things to her in Photoshop; making her look ugly and deformed and scaly and green.  Then boyfriend got home from work and saw them and said, "That's not very nice," and I gave him one seriously rage-filled look and he shut up.

I spent hours at it, and moved on to other photos, snapshots from my childhood, advertisements, images of celebrities, and slowly I learned how to use Photoshop.  And it felt good, I was genuinely expressing my emotions through art, for the first time ever in my life.  During this time in my life I went from being a creative person to an actual artist.  I made a couple of dozen that were pretty good; I printed out posters and sold them in a little hippie shop downtown.

Finally I broke up with the guy and bought my own Mac.  I worked harder and got better. I worked up the nerve and submitted a few pieces to galleries.

This won honorable mention at the OVAL gallery in downtown Orlando: 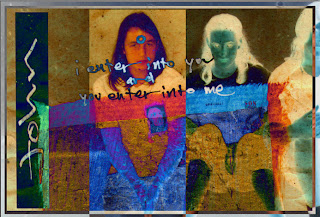 It's a photo of my next boyfriend (taken when he was 12) with a note he had written to me on gold Joss paper layered on top.

This was in the same show: 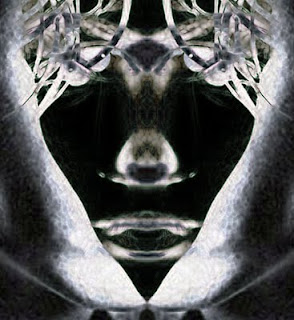 It is a photo of Johnny Depp as Crybaby, just copied and flipped and inverted.

This was in Orlando's Nude Nite: 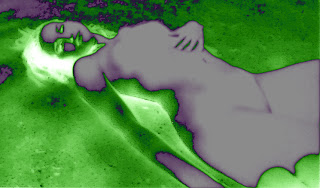 I was becoming increasingly frustrated by having to use other people's photographs for my digital art (the one above was borrowed from a photographer acquaintance) yet somehow when I was finally able to afford my own digital camera I became more focused on photography and less interested in digital artwork.

It has been occurring to me lately that I miss it.  So here's my goal:  I want to take a photo of someone this year, funk it up in Photoshop, and submit it to be in next February's Nude Nite.  It's been a decade since I have really spent time making digital artwork, other than my blog headers.

I took today as a random vacation day, so I am home from work.

This morning I got up early and opened the window in the bedroom so I could hear the birds singing and the splashy fountain in the little pond behind our condo.  We are not very far from a busy street so traffic noise could be heard occasionally, but it was relaxing; and I finally slogged to the end of The Land Of Painted Caves, the new book by Jean Auel.  Boy, that was a job.  I loved The Clan Of The Cave Bear when I read it as a teenager, and have read every book in the series.  I'd heard that this book may be the last, so I got it from the library (which helpfully gave me a deadline).  Maybe some authors who write series struggle with whether to include a buttload of backstory in case the reader has never read the previous books, or to plow ahead and assume the reader knows the score.  Jean Auel seems not to have struggled, but to have thrown herself with gusto into re-writing large chunks of every single previous book.  Overall, I'd have to say I enjoyed this book, but I sure would have enjoyed it more if it had not been bogged down with what must have been 300+ pages of backstory I already knew.  Gads.  Honestly, I skimmed the crap out of that 750-page sucker and it still took forever to get through.

I ran errands (including taking that book back to the library, only two days after it was due) and am now trying to make bread using my neighbor's recipe.  I've tried it twice before, once over-kneading and once not using water hot enough to activate the yeast.  Hopefully today I will get it right, finally!  I am going to keep trying until I get that perfect fluffy deliciousness from my childhood.

I am also taking today to try to get a bit more centered about my writing.  Ideas about what should happen and who the characters are keep crowding into my head, and they are not all fitting together.  Which direction should I take?  My original idea was to write the kind of book I loved to read when I was young, witty and real and full of flawed characters that try their best.  Now I am starting to see another possibility, much more painful but probably more true.

You know what?  I just realized that the second option is scary.  I am scared of it.

Oh hell, that means it's almost certainly the right direction to take.
at May 26, 2011 4 comments:

Yeah, that didn't work.  On my journey to discover who I am as a writer, I can just go ahead and eliminate writing-by-the-seat-of-my-pants, without having any idea what's next.

After writing the littlest bit, I was so lost and directionless that I had to stop to at least try to figure out who my main character was.  I did have an idea that seemed pretty good, possibly.  I thought about it for a few days, and started to get into the idea, even though a few nagging doubts plagued me.   I never know whether to listen to nagging doubts, and am pretty bad at distinguishing which ones are valid and which are neurotic and self-defeating.  Both kinds seem equally strident, frankly.

Knowing that I can trust my husband to give me his honest opinion, I explained my character(s) and the outline of the plot.  He listened carefully, and then pointed out that this was basically the exact same plot and virtually the same characters as my novel.

Still, I thought about it for a couple of days.  What does he know, anyway?  Maybe my novel was just sort of a warm-up exercise, and this was the improved version I was meant to write.  Maybe with a few well-chosen changes this would be a completely different story, and worth writing.  I imagined various scenarios and tried to let the characters speak to me.

Nope, he was right.  The more I thought about it, the more I realized it was all surface and no depth.

As I mentioned, I have two other ideas floating around, and once again I tried focusing on them.  The first, a novel about a woman who murders someone, just kind of waved at me from the back corners of my mind, but wasn't interested in coming out yet.  The second, a young adult novel about a teenage lesbian living in a small town, just jumped right out at me and started yelling.  Sweet!  Oh, the terribly detailed character sketches and outline I'm going to make...  Joy  :)

I feel really excited about this one, and details are coming to me quickly.  And, at least for now, the self-defeating neurotic voices have shut the hell up.
at May 07, 2011 6 comments: