I am a fan of Valentine's day, despite the rampant hateration.

At work last week I heard a lot of complaining, mostly from men saying that it's a fake Hallmark holiday where they have to spend money for no good reason, and it would mean more to give a present/flowers/a card/whatever to their significant other just because they want to, not because the calendar tells them they are supposed to.

I also heard people complaining about being single, and how Valentine's day makes them feel bad.  I do remember going through plenty (plenty!) of Valentine's days when I was single, and sure, it's one of those times where I would stop and really feel single and wonder if and when I was ever going to find somebody to love.  But it never made me feel angry or bitter, sometimes lonely, but I still had hope of finding someone someday.

Greg loves me, and I know that.  He tells me every day, sometimes he does surprise me with little presents and things, and I don't need a fake Hallmark holiday to be reminded of it.  But dammit, I LIKE having a holiday to celebrate love!  And so does he. 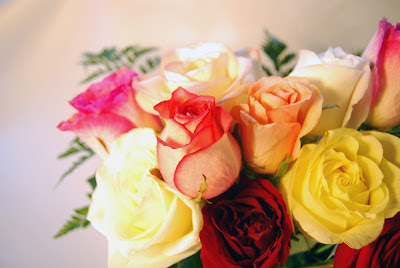 The roses are colorful and smell wonderful and look beautiful.  Despite the "helpful" florist who pointed out that he was paying exactly double the amount he would have paid any other day of the year.
at February 19, 2012 4 comments: