I had my first mammogram in March 2006, and my second one today.  Yes, I should be getting them every year.  Yes, it's one of the things I worry about and beat myself up over in the middle of the night when I can't sleep.

So, things basically went exactly the same today as they did four years ago.  I waited in the first waiting room, a large room with chairs lining all four walls, most of them occupied with people reading or playing games on their phones.  Then I was ushered into the little dressing room, where I took off my top and bra and put on a cloth mauve wrap top.  Then I sat in a second, smaller waiting room; all four walls lined with chairs filled with women in mauve wraps.  Once again, I took a Jennifer Crusie book (she's funny, and that cheers me up).

I am one of those people who will go far, far out of my way to avoid contact with strangers, especially when I am bra-less and in a mauve wrap, and it always ratchets up my tension level to sit elbow to elbow with other bra-less women in mauve wraps.

So after waiting 30 minutes in the first waiting room, and 20 minutes in the second waiting room, a lovely blonde woman in bright floral print scrubs came to get me.  There was no waiting in the actual mammogram room, after introducing herself she immediately got to work.  Unwrap my right side, grab the handle in front with my left arm, let my right arm hang to my side, try to breathe.  (Note:  there is no breathing when a sensitive chunk of your body is being crushed painfully.)  Then unwrap my left side.  Then back to the right side for being squished from a different angle.  Then back to the left side for the different angle.

I thought about just taking off the stupid wrap completely, since basically all it was doing at any given moment was covering one shoulder and half of my back, but when I imagined standing there completely topless, it did seem like it would make me feel even worse.  So I left it "on".

I decided to search for mammogram images, and I found this: 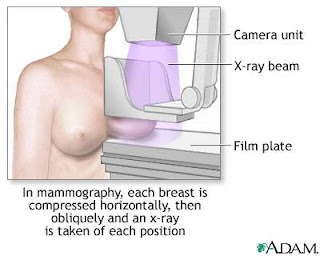 That is pretty much exactly how the machine today looked.  I think "compressed" is an amusing word.

I also found this: 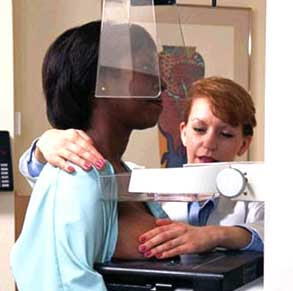 That's hilarious.  See how the technician lady's hand is on the patient's shoulder?  She's not comforting her, or trying to make it easier -- she is pushing her deeper into the machine.  Get in there, breast!

Soon I was done with my squooshing, and my chest was covered with red marks.  Blonde flowery lady ushered me into the third, smaller waiting room, where again all four walls were lined with chairs, and only one of them was empty.  I briefly considered just standing in the hall, but they probably wouldn't approve.

Luckily I was only in the third room for a few minutes, then they told me I could go put my clothes back on and leave.  Apparently the results are mailed to me (and my doctor) in about a week.

It's always stressful for me, because I can't help but think about my Mom having breast cancer.  Twice. And sure, she recovered, she's still here and she's fine.  But she did have to have two mastectomies.

I am hoping that, if something really scary showed up, they would have told me right then.  Right?
at August 05, 2010 4 comments: