It was pure joy, seeing Adam Ant perform live, singing along and dancing in the front row.  It was the best concert I've ever seen (and I've seen Prince four times), and it was one of the best nights of my life.

I really am still amazed that he's back.  He seemed irretrievably lost for so long.  Several years ago I told Greg that Adam Ant would never be back, he'd never release another album or go on another American tour, but I told Greg that if a miracle ever happened and he did a concert in America, we'd do whatever it took to get to wherever it was, even if it meant buying airline tickets and a hotel and traveling across the country.  It won't happen, though, I said. 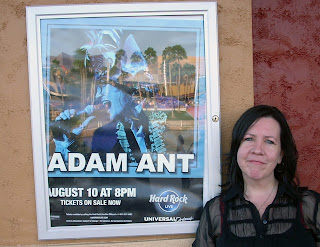 And now he is really and truly back.  He looked so good in concert, he performed without stopping for two hours, dancing all over the stage and interacting with the audience and smiling.  He sounded great and looked happy.

I smiled the whole time.  I was in the front row again (although not quite in the center) and I swear Adam looked right at me several times.  Whenever he did I would forget the words of whatever song he was performing.  The band was great, and again, he did so many of the old punky songs, including several album cuts (and not including several actual hits, which in my opinion are pop blandness, relatively speaking, and Adam must think that too, I think).

The audience was largely middle-aged, which is fine, and many of them were dressed up, which was really cool, and all of them were on their feet dancing and singing for the whole two hours, which was like a religious experience.  At one point I told Greg that I loved them all, the whole audience.  Antpeople!

One of the main things that keeps playing over and over in my head is his performance of Shrink, one of the best songs on his new album.  It's about the time he spent in mental hospitals, in therapy, being medicated.  He pantomimed being punched in the head, in the crotch, and staggering around drugged and disoriented.

A fist in the skull is worth two in the bushYou feeling lucky right nowOr does your brain need a push?
Is it me or is it just medication?Good Morning mister, how's it been?Your daily bread's a daily sinLook at the mighty how they fallI have the shots but it's your callYour fifty minutes is up up up up

We saw several of the same people that were at last year's concert, including a woman from North Carolina who was driving around to all of his concerts in the southeast, and a teenager who was dressed head-to-toe like Adam's Kings of the Wild Frontier look.

The two hours went by way too quickly.  When the encore was over and the lights came on, Greg and I walked over to the side as instructed.  He stayed with me as long as he could, helping me stick the Meet and Greet ID on my blouse and put fresh batteries in my camera.   I know he hated to leave me because I'm sure he could tell how freaked out I was.  I wasn't even exactly nervous, I was just overwhelmed and really kind of numb.

Then he left, and they started taking the 20 or so Meet and Greet people upstairs.  I got my Meet and Greet goodie bag, which consisted of a pretty cool cotton Adam Ant tote bag, a magnet, an autographed photo, a patch and a badge.

The guy I knew from my internet research must be Alex came out and gave us a friendly little speech about how many items we could get autographed and how it would work, and asked us to line up.  I was fifth.

Then Adam Ant came in.  He glanced around the room and when he looked at me, I looked away.  They didn't rush people through, but things moved pretty quickly, and soon it was my turn.

I gave my camera to Alex.  The signing area in front of the room was a step up, and I stepped up.  Adam gave me a quick hug and a little kiss on the cheek.  I got so freaked out I forgot I was holding my glasses, I never did put them on.

We posed for two photos, which have to be the two worst photos of anyone in the history of people.

Then he asked my name, and he started signing my stuff.

I'm so glad you are back, I told him.  I love your music, I love your new album, and I'm just so happy to see you in concert again.  And your performance tonight was even more awesome than when you were here last year. 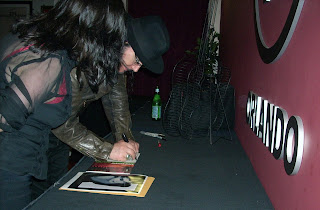 Thank you, he said.

Then he gave me another quick hug and a kiss on the cheek, and I stepped down.

Luckily the Hard Rock Live is well-staffed and organized, and they led me down the hall and into the elevator and around the side and out the door.

Greg was sitting on a step outside, waiting for me.  When he saw me he stood up and gave me a quiet hug, and I only sobbed a little.

It's taken me forever to write this post, at first because I was still so freaked out.  I swear, it took me a week to get to the point where I didn't tear up every time I even thought about it.  I cried at little at my desk at work a few times.

I remain overwhelmed.  I'm still trying to shove this experience into me, into who I am, into my world view and my history and my story.  It just meant so much.  I've done a terrible job of explaining it.

One week from tomorrow Adam Ant will be performing, again, at the Hard Rock Live here in Orlando.  Again, I have front row tickets, and again, Greg and I are SO excited to see him perform.

But this time, after agonizing about it for several months, I bought the Meet and Greet ticket.  For $300.

So, okay, that's a lot of money.  I certainly wouldn't have done it if Greg hadn't kind of pushed me.  And that didn't include admission to the actual concert, and it doesn't allow Greg to come to the Meet and Greet with me.

According to the rather exhaustive research I've done online, the Meet and Greet will consist of my being herded back to an area backstage, given a VIP Adam Ant tote bag with an autographed 5x7, a badge, a magnet, and a patch.  I will wait in line with other Meet and Greet obsessive fans who also had a spare $300 to spend on an experience that will last mere moments.  When I reach the front of the line a person named Alex will take my camera (and I can't bring my good camera because DSLRs are not allowed, so I'll take my little point and shoot Nikon) and take two photos of me looking nervous while Adam smiles uncomfortably.  If I were like every other person doing the Meet and Greet  I'd then give Adam a present that I'd made for him; I am not going to do that.  Then Adam will sign whatever mementos I brought for him to autograph.  If it's a pre-concert Meet and Greet Adam will chat with me for a few moments, being friendly and British-ly polite, and then I'll get to meet the other band members.  If it's post-concert, he will say a few words and I'll then be rushed out by staff members.

I think this has brought about in me a minor existential episode.  The idea that I can meet someone who has had such a big impact in my life and in the person I've become, for cash, seems really bizarre, like trading baby kittens for the ability to fly around on the starship Enterprise.  The possibility of then being disappointed by it seems too awful to survive.

But how can I not?  The opportunity to stand next to him and talk to him, and see the reality of him being a person, is just irresistible.

The really stupid thing is that I HAVE met him.  Of course I saw him in concert multiple times, and of course I figured out how to find out which hotel he was in (leave the concert at the beginning of the last song and follow the tour bus/limo), and of course I hung around the lobby/bar for hours.

The first time was in Atlanta on the Friend or Foe tour (1983), and it was just a glimpse:  I was in the lobby when he was rushed from the limo to the elevators.  He had a sweatsuit on and still wore all his makeup from the concert.  It was shocking to see him, a human person, just like me.  He was a person!

The second time was in Washington DC on the Strip tour (1984), and my friend Jaime and I hung out in the lobby and met one of the band members, who invited us to the "party room".   It was a regular hotel room filled with band members and groupies.  I am pretty sure my parents would not have been too happy about their 17-year old daughter being there, but I didn't do anything bad.  When Adam walked in, Jamie and I waited until he was standing by himself and then rushed over.  I love your music, I told him.  And your tattoo, I said, touching his tattooed upper arm with my fingertip.

The third time was in Norfolk VA on the Vive Le Rock tour (1985), and I saw him walking through the lobby from the elevators towards the bar.  I was on the other side of the lobby, too far away, so I called out "Adam!' and when he stopped and turned toward me, I jogged over.  He waited for me, which in retrospect was pretty nice.  Hey, I said when I reached him, nice shoes.  We both looked down at his checkered Vans.

This time I was ready, and I asked if he could autograph my tour program.  While he did, I told him how much I loved his really early music, the punky songs that at that time were largely unavailable except on bootlegs.  I don't want to buy bootlegs, I told him: Do you have any plans to give those songs a real release, or even re-recording?  He told me that he was bringing them back a few at a time, mostly on B-sides, and had no plans other than that, at least not yet.  He loved those songs too though, he told me.

Then a bunch of girls/groupies/fans/toadies clustered around him and I moved away.  He did release all of those songs a few years ago on a comprehensive multi-cd box set called Antbox.  And he's doing a few of them live on this current tour.

One week from tomorrow, I'll meet Adam Ant again.  I'll stand next to him, and hear him say my name, and get his autograph, and have a photo taken with him.  I feel a bit like I am doing this to please a 17-year old girl who only exists in my memory, and a bit like I'm participating in the whorification of my musical idol.

But how lucky are we both, though, really.  After more than a decade of struggling with mental illness Adam is back, creating and performing and, I think, enjoying it.  I am here, the loyal fan, well off enough to have a spare $300, still remembering all the lyrics and actually learning the new ones and positively joyful to dance to my favorite music ever at yet another concert.

I suppose it's beautiful, regardless of the minor details.