Man, old Debby sitting on top of Florida has made the past several days dark, wet, windy, and completely unpleasant.  I get a little depressed when I don't see the sun for days and days.   I haven't had it nearly as bad as some parts of Florida, with flooding and tornadoes and power outages, so I shouldn't complain. But still.  Dark grey skies are just wrong, where is my blue sky?

Next week Greg and I had planned to be on vacation, we got our time off requests approved months ago.  We weren't planning to go anywhere, other than driving to the beach one day.  Greg is not a fan of the beach, but once every ten years or so I feel justified in guilting him into it.

The week after that I made a reservation for the guest room in Mom's retirement home, so I'll be visiting her for three days.  I have to admit, I am really looking forward to that.

Now that I have more time to play around, I made a new header for the blog.  The old header was awesome, if I do say so myself, and I'm not sure yet how I feel about the new one.  Leave me a comment and tell me what you think!

I'm trying to be colorful and cheer myself up.  Here's a photo I took of the sun a while ago, hopefully one day soon I'll see the sun again. 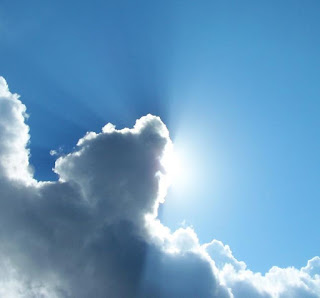 Last week I tried to stay busy.  Up with Greg every morning at 6:30, working out, going to free classes at the library and the Apple store and the Workforce Central Florida office. I got more cleaning done than usual, and made dinner for Greg every night.

This week I feel further adrift. I had a weird, almost panicky moment on Wednesday when I realized that I had no idea what day of the week it was.

I kind of hated going to work every day.  Especially with my hellaciously long commute, I was gone from home for 10+ hours every workday.  Before work was filled with getting ready for work, and after work I was tired.  I felt like life was passing me by while I was busy going to work, being at work, coming home from work, or recovering from having been at work.

Even though I didn't want to do it, I guess it defined me, in a lot of ways.  It's like a giant chunk of who I was is gone now.  Even if who I was was a person who resented the hell out of having to spend so much time away from home.

Greg has been awesome, as usual.  He's encouraging me to go visit my Mom in the next couple of weeks, and I guess he's right.  If When I find a new job I won't be able to take time off right away.

Email ThisBlogThis!Share to TwitterShare to FacebookShare to Pinterest
Labels: Friday, life, who am I, work

The second week of March I found out that my little department of 8 was basically being eliminated.  We would find out more details in a week or two, we were told, but as of April 16 my job would be gone.  They would be creating new jobs, they said, and the 8 of us could apply for those, but they didn't know how many, or what would happen to the rest of us.

Weeks passed.  April 16 passed.  I dragged out my old resume and, with the help of my good friend Wooz, polished it up.  I searched around online and applied for some jobs.  I had two phone interviews that both started with them telling me that they were sorry but the job had just been filled.

More weeks passed.  The stress at work mounted, especially since they had told us not to tell anyone; there would be an official announcement and until then we had to keep it quiet.

When will we get answers, we asked repeatedly.  Maybe this week, they kept saying.

Months passed.  I finally realized I needed to think of it as a reprieve, the longer it dragged on the more time I'd have to find something else.

Then the morning of May 21 they brought us all into a conference room, with our boss, her boss, and the HR lady.  They were creating 2 new jobs, similar to our current roles, that the 8 of us could apply for.  Those of us that didn't get them could apply for a job going back on the phones in the call center.  They said the same thing was happening to the marketing department, and we could also apply for those newly created jobs.  Most of our job duties would be transitioned to the supervisors, to admin, and some would just be eliminated.  They offered us a bit of severance, which I wasn't expecting. The transition, interviewing for jobs, etc. would take three weeks. Anyone not taking a newly created job or going back to the phones would have their last day on Friday June 8.

I had my last day on Friday.

I did apply for the two positions, but there were others in the department that had literally been doing the exact job description duties, and I hadn't.  Most of my daily duties were given to supervisors. I also applied for a newly created copywriting job in the marketing department, but it was the same situation there, someone(s) had already been doing that.  I wasn't a bit surprised when I didn't get either one.

The stress of not knowing what would happen or when it would happen was pretty intense.  People at work have been snappish, tense and uncomfortable.  And sad, knowing that our very close family was being broken up.

We had one last potluck a couple of weeks ago, our boss brought in barbecue pulled pork in her crockpot and someone else made baked mac and cheese.  Our department always decorated for holidays, putting up American flags or shamrocks or hearts or snowflakes, and last week all of the decorations were spread out in a conference room for people to take.  (I took most of the St. Patrick's day stuff.)  Our boss got too sad and ended up not being able to go in the room.

On Friday, driving to work and walking into the building was surreal, knowing it would be the last time, ever. After sixteen years. I started working there in January of 1996.

Our boss had set up a nice breakfast in a conference room, as a way for the whole company to come by and say good-bye.  Out of the eight of us two got the new positions, two decided to go back on the phones, and four of us took the severance and left.

People kept coming up to me with tears in their eyes.  I hugged so many people.  I didn't cry.  Everyone said they'd miss me so much, that I was just so nice and so helpful.  What were they going to do without us?  Keep in touch, people said, look for me on Facebook.

So many people there have worked there for a decade or two.  We sat and shared stories of how things were back in the olden days, and so many people told stories of how I'd been nice to them or helped them out.  I was surprised to realize that two separate co-workers, independently of each other and unbeknownst to each other, had both given me the same nickname:  angel.

It was in the quiet moments, sitting with my co-workers, when no one was actually speaking to me or looking at me and I was just watching everyone, when I almost cried.  "Don't cry until you leave," Mom had advised on the phone the night before.

And I didn't.  I had my final paperwork meeting with the HR lady.  She told me that she had been able to see so clearly, in the copywriting interview, that I know what my passion is.  Follow your passion, she said to me intensely, leaning over her desk. You know what you are good at, go do it!

I said goodbye to my sweet boss one more time, and she cried.  I hugged my co-workers one last time, and several of them cried.  My desk was empty, I had cleaned it out completely the day before. I signed off the computer and walked out. For the last time.

I called Greg to tell him I was on my way home and that's when I cried.

I felt pretty numb for the rest of the day Friday.  Greg said we were celebrating, we were not sad.  We ordered a pizza for dinner, a treat for us, and had champagne.

Saturday Greg took me to Yankee Candle and Hallmark and Barnes and Noble.  Buy something, he said.  Get yourself a little present.  We're fine!  I bought a couple of tarts and birthday cards and a Christopher Moore book on sale.

We had lunch at California Pizza Kitchen, and over salad and pasta Greg asked me if I wanted to tell him about how it went at work on Friday.  I teared up and said, Not yet.

I told Greg about how I didn't want to take time to relax, like so many had advised me.  I wanted to start off Monday morning with serious intent, and get going.  Why waste time?  Greg gently told me that I had spent the past three months under a ton of stress, and the very first thing I needed to do was unwind.

But I'm all right.  I'm extremely emotional about saying good-bye to my co-workers, many of whom I've worked with for the whole sixteen years.  I feel really strange about not having a job to go to.  But at the same time, I am enthusiastic about finding something great.