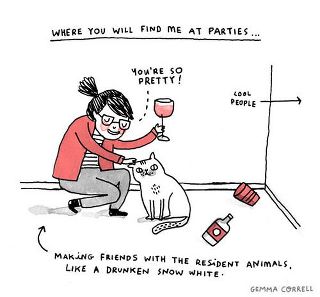 Gemma Correll
I love this.  One of my friends posted it on Facebook, and boy, is this ever ME.

On Thanksgiving day, Greg and I took my homemade pumpkin pie (and Cool Whip) to his Dad's house for lunch, and we hung out with his father, his stepmother and her siblings, his sisters and their various husbands and children.  We ate ham and turkey and stuffing and all the typical Thanksgiving stuff.  After stuffing ourselves Greg and I went out to the backyard to meet his little sister Kayla's dog Capone.  Capone is a lovely and high-spirited young German Shepherd dog.  He fetched a ball for us, liked having his ears scratched, and is prone to jumping up on people -- I sadly had to deflect him due to his muddy paws.

Then we took more pumpkin pie (and Cool Whip) to Greg's sister's (on his mother's side) house, where we hung out with his sister Ashley and her husband and two sons, Greg's mother and aunts.  They have had two sweet little Chihuahua dogs, and they recently adopted a mixed breed dog who is at least partly Dachshund, and a little black Labrador puppy.  I spent some time petting the little black Lab, who has an adorable puppy tummy, and playing with the Dachshund's long silky ears.  At one point I was on the couch and both Chihuahuas hopped up on me and curled up on my lap.  They're so little they both fit.  *happy sigh*

On the way to Ashley's house we stopped at the shop of one of Greg's clients.  A little sweet black and white kitty lives there and Greg is friends with her, and since she's mostly an outdoor cat, he was hoping she might be hanging around.  When we pulled up, she stood up from her sleepy spot in the sun and started meowing at us, as though she'd been waiting.  She was the friendliest cat, I picked her up and cuddled her and she just purred and purred.

The highlight of our Thanksgiving day was clearly the animals.  It's true, Greg and I are both very thankful for dogs and cats...  Sometimes more than people, particularly relatives.
at December 04, 2011 No comments: