I have never before been so stressed about work stuff that I just couldn't stop myself from thinking about it all the time, while at work and at home in those moments where my mind is not occupied by something immediate.  When I'm driving, when I'm taking a shower, when I'm doing the dishes, despite my best efforts to calm down and stop thinking about it I find my mind turns to work issues.
I have never wanted to write about work stuff on my blog, and I still don't but there seriously isn't anything much else in my head these days.  And I'm so busy, and so tired.
I work in a call center operations department, overseeing two call centers in two cities, totaling over a hundred agents and dozens and dozens of different types of calls coming in on different lines.  We use two main programs for this, one to watch/control the calls and one to watch and track the agents.  Both are changing, this weekend.
The new program to watch the agents is one that we have received a fair amount of training on, and a manual.  The training was all done in a hypothetical context, because none of the actual information that we will be using was loaded into the program.  Still, it was helpful.
To learn about the new program to watch the calls we were included, along with a dozen other supervisors and managers, in a web conference projected onto a screen in our training room.  The actual stuff that we will do, watching and controlling calls, was but a very small amount of time, and very hard to see on the screen.  And that's it, no training manual.
To say that we are panicking is putting it mildly.  My department is small, only 9 people, and we are all walking around like we are in a nightmare.  (One co-worker is actually having nightmares.)  One other co-worker looks weepy and confused, one keeps snapping at me and then apologizing.
Our boss is a wonderful person who we all care about a lot, and she is having a very sad family emergency and has been out of the office most of this week.  Our sadness for her is not helping, and neither is the fact that she's not there.
Pretty much every other department is the same as ours, panicked and overworked and understaffed (two supervisors have left and not been replaced, two people on the technical team overseeing these changes have quit).
Like a cloud of doom hanging over our heads is the fact that our office location will soon be reconfigured to be 50% smaller.  We have no idea how this will happen or when it will begin, but the office manager keeps bringing people into our area muttering about knocking down walls and putting in doors.  When asked they tell us that an official statement will be coming at some point, they don't know when, but soon, within a month.  Until then we feel somewhat homeless, having been asked to clear out anything not vital from our cubicles.  None of us has even started with that yet, and unused bins sit stacked in the corner, a reminder that something is coming, but who knows what, or when.
We found out yesterday that a giant amount of information that was supposed to be uploaded into one of the new programs hasn't been, and won't be -- the company didn't pay for that upgrade.  I have no idea how that wasn't made clear to us earlier, but it means we will have to do it all manually, before Sunday.  It's extremely tedious and will take a really, really long time.
When I visited Mom last month, we went through some very old photos, and I found this one.  Mom laughed but was slightly appalled when she saw it, I don't think she quite approves of Dad having taken a photo of her so (in her mind) unattractive.  It must have been taken sometime in the late 1930's.
I love it, and I am sharing it, because it really makes me smile.
Written in her handwriting in pencil on the back is this.  It says, "Made just after I got up to the top of Stone Mt! Some climb --" 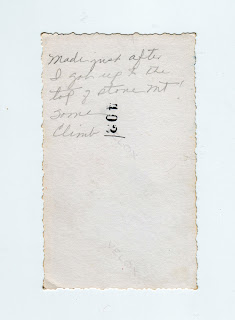 And here is the front.  I love this, and I feel a lot like this lately, especially when I am finally walking out of the building, across the parking lot to my car to go HOME.  Too bad I don't have a cute hat like that. 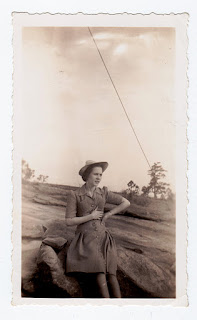 On Friday 9/23 I posted this status update to Facebook:  On Friday, September 30, one week from today, my wonderful mother will celebrate her 90th birthday. She absolutely loves to get mail, and would be delighted to get birthday cards. Anyone interested in pleasing a sweet 90 year old woman, please PM me for her address. :)
I was surprised to get more than a dozen messages from people who wanted to send her a card.  One person from high school that I haven't seen in decades, one person in another state that I only know from work, so many people who have never met my mother sent her cards.  She ended up getting 32 cards, here's a pic of her display (she got more after I left, so this isn't all 32): 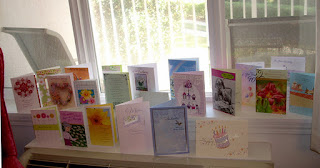 Many of the cards were from our relatives in VA, including my cousin Clara Sue, who is a third grade teacher and had her whole third grade class draw cards for my mother.  How sweet is that?  Here is Clara Sue's birthday wish/memories: 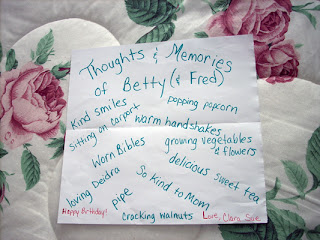 Dad actually grew popcorn in the garden and had an old (very old, I don't even know how old - possibly from the 1800's, maybe the very early 1900's) popcorn popper.  It looked like a metal box on a metal pole, we'd shake it over the fire in the fireplace to pop the corn. Popcorn at my house was an antique country adventure, that's for sure.  He also had walnut trees and would sit on the carport shelling walnuts for hours.  I still miss those black walnuts, nothing that I've found in stores since then has even come close.  Back then Dad smoked a pipe, and I have to admit, as a teenage girl I bitterly resented all my clothes smelling like pipe smoke.  Everyone has fond memories of that smell except for me, I think.  Deidra is Clara's little sister, who was a baby when I was in high school, and my Mom really doted on her.  It's a thoughtful and sweet list of memories.

Here's a pic of the whole group of drawings laid out on Mom's bed:

I especially love the mermaid and the one with "Star Wors" characters holding little light sabers.

She also got a giant flower arrangement from my cousin Tony and his wife.  You can't really tell in this pic, but I swear it had to be nearly 3 feet tall.  And it meant so much to Mom, who remembered how Dad used to grow sunflowers in the garden in VA. 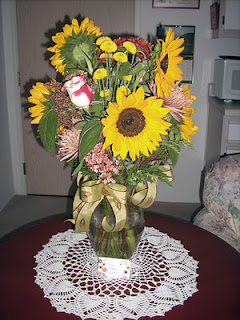 I had quite a wonderful trip.  I always get slightly anxious about making the long drive alone, but then once I'm on the road I'm fine, and everything went perfectly.  We had our traditional breakfast for dinner at IHOP the afternoon I arrived.  The next day we went shopping at Belk and Penny's and bought a couple of new blouses for Mom.  She made it just fine with her cane and with me helping her get around, although it always makes her very tired.

On Friday, her birthday, we went to Longhorn for lunch to celebrate: It was my brother and his wife and their daughter (her husband was at work and couldn't come), my sister and her husband, and me and Mom.  A big enough group to be celebratory, but small enough so that Mom was able to hear what was being said (most of the time).

I had several meals in the dining room with Mom and her friends Mickie and Wilma, and spent time watching Jeopardy and Wheel of Fortune.  Mom has turned on the closed captioning because often has trouble making out what people are saying, but I tried to speak clearly and she rarely had to ask me to repeat anything.

She's been sad about her hearing, and I think this visit cheered her up.  I'm already looking forward to going back at Christmas.  It just makes me feel good to be with my Mom.
at October 09, 2011 3 comments: