We got to the Hard Rock Live right around the time the doors opened, at 7:00pm. 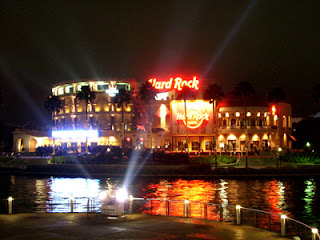 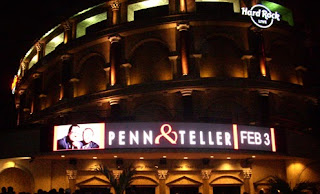 I had my 1989 copy of Cruel Tricks for Dear Friends tucked safely away in my super cool big canvas purse from The Strand bookstore, along with the Nikon point-n-shoot camera.  We found our seats, which were near the front of the balcony. 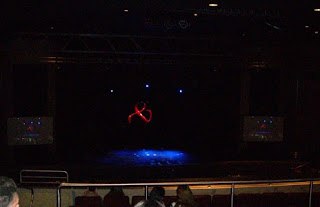 We went back down to the lobby to check out the merch: They were selling cool black t-shirts for $20, which is a really good price, and programs for $10, which were big and glossy.  I asked the merchandise chickie and two security guards if Penn & Teller were going to come out and meet fans afterwards, because they usually do, and they all said they'd be outside by the lagoon.  Three randomly-sampled official people all having the same story made me feel like they might know the right answer, so I relaxed a little.
I had packed in my purse, in addition to the P & T book and the camera: tissues in case I cried (or sneezed), ibuprofen in case my back or feet or head hurt, a Sharpie in case Penn and/or Teller didn't have one already, lipstick, hairbrush, breath mints, extra copy of car key, cell phone, small umbrella in case it rained, business cards for Greg's website just in case we met someone who'd be interested (which we did).
It is part of the unusual and sometimes terrible psychology of being me that I get anxious before exciting happy times.  It makes sense to me: What if something goes wrong?  But it seems to perplex normal people, who just enjoy looking forward to exciting happy times.
Greg and I visited the bar and sat back down with a beer and a dirty martini.  I carefully watched the time and went to the bathroom five minutes before the show was scheduled to start.
I've seen Penn and Teller perform on tv many times, but knew that it would be different in person, and it really was.  It genuinely lived up to all of my very high expectations, it was bloody, sarcastic, hilarious, and amazing.  And kind of indescribable, really.  The whole audience seemed utterly mesmerized, and during the quiet parts, everyone was completely silent.
The show started right on time and lasted almost two hours.  Afterwards, we headed outside to look for Penn and Teller.  Despite the earlier assurances, this made me a teeny bit nervous, as there was no re-entry.  If they were actually meeting fans inside I'd be screwed.
Just outside the doors there were two giant hordes of people, one to our right and one to our left.  Being 5" tall, I couldn't see well enough to tell if it was them, but Greg is 6".  He stretched up on his tippy-toes and confirmed that Penn was in the middle of the horde on the left, Teller was to the right.
We squirmed into the crowd and waited our turn.  I could see a lot of people were getting their ticket stubs signed.  Ha!  Amateurs.  They clearly weren't P & T fans who'd done their research ahead of time.  I pulled out my precious first-edition copy of Cruel Tricks for Dear Friends, and I was ready.
Penn was very much in control of the crowd.  I did see (and by "see" I mean "got squished against") a security guy with a bluetooth earpiece a couple of feet away from Penn.  Penn would sign what was presented to him, take a photo if asked, and managed to keep a small space around himself at all times.  When it was our turn, I held up the book.
Me:  "Can I get your autograph?"
Penn, seeing the book:  "Hey, look at that!"
He signed what is basically a scribble, and handed the book back to me.  I stared at his left hand ring finger nail, which is the one he paints with red nailpolish.  I noticed the polish was kind of a dark pink color, and felt completely surreal standing next to it.  Good grief, this was really Penn Jillette!
Greg, ready with the camera: "Do you mind if she gets a quick picture with you?"
Penn: "Of course not!" he said, and putting his arm around me, leaned waaaay down (he's 6'7") so his head had a chance of being in the same frame as mine.
Greg took the photo, and then shook Penn's hand.  "Thank you so much!"
Penn: "No problem, boss." 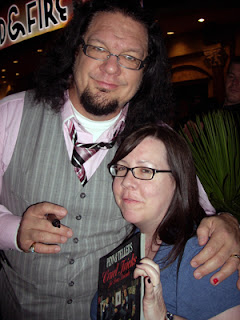 We made our way to an open area, and I felt shaky and slightly weepy.  Was it real?  We decided to throw ourselves into the Teller crowd, and headed over.  Teller was working his crowd as efficiently as Penn did, going around in a clockwise circle.  The dude right in front of us got his ticket stub (what a loser) signed, and then completely messed up the rotation by failing to exit the area immediately afterwards; he just stood there watching Teller sign autographs for the people next to him.  What will happen when Teller gets around to me?  Will he know that he already signed for this doofus in front of me who won't leave?  The whole system has been thrown into chaos!  But finally the doofus left.  Whew.
Eventually I was next, and Teller turned to me.  I held out my book.
Me: "Could you sign this for me?"
Teller, smiling at the book.  "A classic!"  (He has a very nice voice, by the way.)
Me, smiling back: "It IS!"
He signed it, and handed it back.
Greg: "Would you mind if we got a picture?"
Teller: "Certainly."
He put his arm around me and Greg took the photo.
Greg shook his hand and thanked him, and we left. 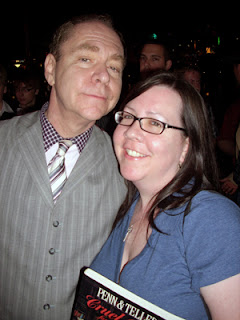 It was a lovely night!
*happy sigh*
Side note:  I am not thrilled about posting these pics of me, particularly the one with Penn, in which my face is clearly too excited to know what to do.
Upon getting home and seeing the photo:
Me:  "Gah!"
Greg:  "Aw, look how cute you are."
Me:  "Wow, you really love me a lot."
But I did make a promise that I would be fearless (or at least less fearful) with this blog, so I'm trying to live up to my word. 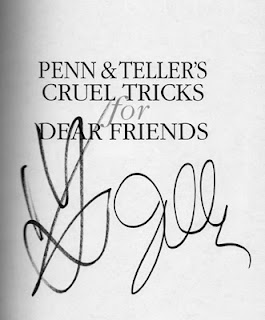