We all had such a great time on Saturday!  We had Italian food and sangria, then hung out singing Bon Jovi and Michael Jackson songs in the bar at Margaritaville, and despite the rain we all had a lot of fun.

I would like to congratulate myself for resisting the peer pressure to do a Jager bomb in the theatre before the movie.  (Yes, the massive movie theatre at Citywalk has a full bar.)  There's no pressure worse than do-a-shot-with-the-group pressure.  But I persevered and emerged victorious!  And sober.  :)

We sat in the front row, which for this show is the place to be.  The Rich Weirdos seriously do the most amazing shadow show I have ever seen.  They are professional, and extremely talented, and take it very seriously.

Here's a photo of shadow Frankie (I don't know their names) with shadow Columbia, during Sweet Transvestite.  You can see the movie behind them, and shadow Brad and Janet and Riffraff off to the sides. 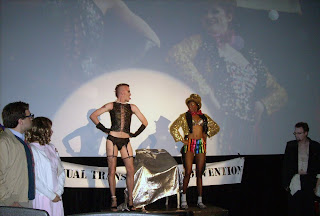 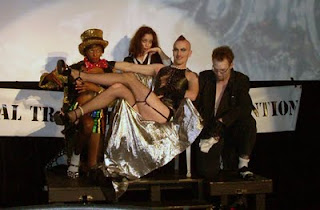 Even though he doesn't have one in the movie, shadow Frankie's mohawk was very cool.

We have decided to make RHPS outings a semi-annual event, at least.

I want to go

To the late night