* I know my entire 10-digit library card number by heart

Thank goodness for libraries!  I wouldn't read nearly the amount of books that I do if I had to actually PAY for them all.  I love browsing through the big library downtown and picking up all types of different books: foreign cookbooks, photography and art books, travel guides, novels and biographies, funny books by famous comedians, books about history and psychology and technology.  Not even to mention the DVDs and CDs and audio books...

* I have recurring nightmares about public restrooms

I don't have them too often, usually when I am stressed or anxious about something.  I always have to pee so bad I literally can't stand it, and the public restroom is always disturbing in some way.  Sometimes I am looking desperately around a huge dark restroom and there are lots of stalls, but none of them have actual toilets in them.  Sometimes it's a giant crowded restroom with toilets sitting out in the open.  One time I dreamed I was in an empty abandoned house, in an upstairs room like a bedroom but with a toilet right in the center of the room, and a rusty clawfoot tub in the corner with a dismembered body in it.  One time I dreamed that I was in a plain generic office building, and the restroom was a big room of Victorian antiques, filled with fancy end tables with doilies and little figurines on them, and somehow those were the toilets and I was expected to pee on one.

Don't bother trying to psychoanalyze my freaky subconscious, I clearly have privacy issues.  The funny thing is, I almost never have bad dreams, but when I do it is ALWAYS about a public restroom.

* I know all the words to the 70's song Ariel by Dean Friedman, and often sing it in the shower

I can't sing, of course.
"She was a Jewish girl. I fell in love with her.
She wrote her number on the back of my hand.
I called her up, I was all out of breath, I said,
"Come hear me play in my rock and roll band."
I took a shower and I put on my best blue jeans.
I picked her up in my new VW van.
She wore a peasant blouse with nothing underneath.
I said, "Hi". She said, "Yeah, I guess I am."
It's a cute song, about a guy who meets a girl named Ariel, she comes to see him play in his rock and roll band, they go out to Dairy Queen, then they go back to his house and have spaghetti and talk into the night.  Did I mention that I can't sing?

* I do not wear deodorant or antiperspirant, ever

When I was a teen I tried, but they all gave me rashes (I have bad allergy-skin). So I gave up, and... nothing.  I kept waiting for the terrible stinkiness to start, but it never did.  I have literally asked every boyfriend I have ever had to smell my armpits, and they have all assured me that I smell fine.  Even during my unshaven hippie feminist phase.  I am not stinky.  Maybe it's all a big marketing ploy, and nobody needs to wear deodorant!   Damn those giant deodorant corporations.  Down with the man, fight the power!

Sometimes when she curls up to sleep she cradles her head in her paws.  Maybe her nose is too cold?  I'm not sure why she does it, but it's pretty cute. 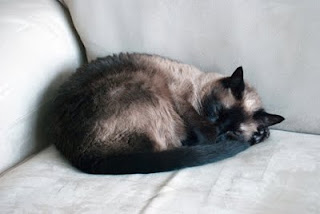 The MID Of My Life

From Wikipedia:  Midlife crisis is a term coined in 1965 by Elliott Jaques and used to describe a period of dramatic self-doubt that is felt by some individuals in the "middle years" of life, as a result of sensing the passing of youth and the imminence of old age.
Jungian theory holds that midlife is key to individuation, a process of self-actualization and self-awareness that contains many potential paradoxes. Although Carl Jung did not describe midlife crisis per se, the midlife integration of thinking, sensation, feeling, and intuition that he describes could, it seems, lead to confusion about one's life to date and one's goals.

I think I might be having a midlife crisis.

It started a couple of years ago when I was visiting Mom. She always tries to give me stuff, old books and greeting cards that she'd saved and miscellaneous things that she doesn't want us kids to have to wade through when she passes away. Mostly she gives me photos, which I love. But it suddenly occurred to me: Mom is giving them to me because she's 88 years old and these photos are important; she wants someone to have them and appreciate them. But what happens when I die? I don't have any kids. My brother and my sister are both more than 20 years older than me and are not likely to be around after I'm gone. They each have one child, my niece and my nephew, who are (more or less) my age and have families of their own.

The thing is, a lot of the old photos are from Virginia, where my parents both grew up, and where I grew up. But the rest of my family grew up in Georgia, and that's where they all are now. So there are a lot of photos of neighbors, friends and even relatives that basically no one in my family really knows, other than my mom and me. After me, there is literally no one who will know who these people are, or care about the pictures.

These photos are so important. People's weddings and birthdays and graduations, Christmases and family dinners and county fairs. I have a photo of my cousin Bonnie, who died of breast cancer decades ago, eating my Dad's special Silver Queen corn on the cob at my parent's dining room table. And a photo of my aunt Mamie Sue, who passed away a few years ago, propping her swollen feet up at a Christmas party back in the late 70's. A snapshot of my mom holding our neighbor's newborn son (who is in the military now), she has a weird smile on her face because she's trying to look nice for the picture in spite of the baby's diaper leaking on her.

I started questioning my decision not to have children. After all, at 43 I am younger than my mother was when she got pregant with me. I haven't had any hints of peri-menopause and could, theoretically, get pregnant. But I really don't want to have a child, and it occurred to me that having a kid for purposes of passing on family photos would be a fairly bad reason.

Up until I started thinking about all this, I was enjoying making scrapbooks. I had made a couple and was working on a new one. But then I started questioning why? I make the scrapbook, look at it, show it to my husband and maybe my mom and a friend or two, then it goes on a shelf. Then I die and who cares about my scrapbook? It wouldn't mean anything to anybody else, in spite of all the loving care and time I put into it.

Then I just started feeling old in general. It suddenly hit me that all of those things that I had vaguely imagined I would do someday, like spending a month driving across the country, or running in a marathon, or going to New Zealand, or learning to speak French, or writing a novel, or seeing the Louvre, or losing enough weight to look good in a bikini, or skydiving, or hiking the Grand Canyon, would probably never happen. When I was in my 20's there was this big giant future ahead of me, and I imagined it filled with all manner of possiblities. But now I'm 43, and how many more years do I have? My mother is almost 90 and has always wanted to go to Hawaii, but she never got to, and now it's too late -- she is physically unable to travel that far. I hate it so much, it breaks my heart. I wish I could go back in time and buy plane tickets for her and my father to go on vacation to Hawaii, even if I had to sell a kidney to do it. But now it's too late.

So maybe I have another decade or two, if I'm lucky. But there is no way all of those things I imagined doing will ever be possible in my remaining "good years". Letting go of the idea of limitless possibilities and time for accomplishments feels like death to me.

I suppose what I need to do is prioritize. Forty-three is still young enough to have some time left to do some stuff. Imagining being at the end of my life, what would I most regret not doing?

Last Thursday my husband and I celebrated our 6th wedding anniversary by going to see The Killers in concert at the UCF Arena.  He is a huge Killers fan, I like them a lot but am not quite as familiar with their songs as he is.

We had never been to the UCF Arena before, even though we live pretty close.  We paid $10 to park in a garage and walked about a block to the Arena entrance.  The Arena was nice, we decided we need to go to concerts there more often from now on.

People-watching was awesome.  We saw drunk college guys double-fisting beers, skinny college chicks who couldn't have weighed 90 pounds, lots of tattoos and lots of cool Killers t-shirts.  (Also a lot of "Victims" shirts, which is The Killers' fan club.)  We also saw a lot of cougars, who were utterly true to their stereotype, wearing tight jeans with high heeled strappy sandals and following around the college boys.

Our seats were amazingly close to the stage.  I bought tickets in the center of the fourth row of the first balcony, which I was afraid would be too far back, but I knew we didn't want to be on the General Admission floor.  It turned out that the first balcony is only about 5 feet off the ground, it's basically just seats at the back of the GA floor, which wasn't very big.  We had a great view of the stage.

There's really something magical about the atmosphere at a concert, and this particular concert was spectacular.  The whole audience was on its feet dancing and singing along for the entire 90 minutes.  The look on my husband's face as he sang his favorite songs and danced (danced?  he never dances!) was absolutely joyful, and made me so happy.  It was a wonderful and perfect way to celebrate our anniversary.

Too bad that we are obviously quite old and congealed, because we were both sore the next day from dancing.  How pitiful!  We clearly need to do this way more often.