When I was 17, the summer after my junior year in high school and before my freshman year at community college (I skipped senior year of high school, went to community college for 2 years then transferred to a university) I had surgery on my mouth. As scared as I was about having surgery and being in the hospital, I was more than ready for an end to the daily struggle that my mouth was causing.

My upper jaw had begun growing a bit crooked, and while you really couldn't tell any difference by just looking at me, my teeth didn't meet at all on one side of my mouth, or in the front. The top and bottom teeth in the very back of the right side of my mouth met, but there was about a 3/4 inch space between my top and bottom teeth in the front, and more than an inch in the very back of the left side of my mouth. So I couldn't really eat normally, and every now and then I sounded weird when trying to pronounce certain words. Biting into anything like a hotdog or an apple was pretty close to impossible, and eating most food was difficult.

The actual surgery to basically break my jaw and wire it back together was way more intense and scary than the doctor had led us to believe, but I made it through fine. I had instructed my parents very carefully that an extremely important thing was happening the day of my surgery -- Prince was releasing his next album after my beloved 1999 -- and I HAD TO HAVE IT. They probably pointed out that I couldn't listen to an album in the hospital, but it didn't matter, I wanted to SEE it. So there I was after surgery, in intensive care with beeping machines and my mouth wired completely shut with a mouthful of medieval looking metal, clutching my Purple Rain album. 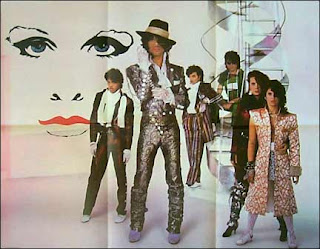 The poster that came folded up inside the Purple Rain album. See how tall Prince is? :)

Once I was released from the hospital I endured six weeks of having my mouth wired shut. I had regular braces, plus they had big thick wires going vertically from my top teeth to my bottom teeth, and my top teeth were sitting in a little molded plastic tray. In the true spirit of torture, they also gave me a tiny pair of sharp scissors on a cord to wear around my neck, to have handy to cut the wires loose so I wouldn't choke to death if I ever got sick and threw up. Isn't that a pleasant thought! Good times.

For six weeks I drank Coke with no ice (too cold on my teeth) and strained clam chowder. I didn't lose any weight at all, and seeing food was the most torturous thing ever; I would hide when my Mom and Dad would eat dinner and leave the room when restaurant commercials came on.

Funnily enough, I didn't mind much about not being able to speak. I could write a note if I really wanted to communicate something. And other than my once-a-week checkups, I didn't really go out too much. One of the reasons I had the surgery in the summer was so I could just stay home the whole time and not really see anyone. Once a week, though, I had to drive to Salem, VA, which was about an hour away, and get x-rayed to make sure the bones were healing correctly. Every week, after my appointment, I would drive to nearby Roanoke, VA, to see the movie Purple Rain.

I would walk up to the booth and hold up my piece of paper that said PURPLE RAIN, and they'd sell me a ticket. I'd go to the concession counter inside and hold up my little paper that said "COKE - NO ICE, PLEASE". I wonder what the people who worked there thought about the really short chick with dark brown hair long enough to sit on, punky jackets full of D-rings and Adam and the Antz buttons, black lace wristbands and a mouthful of chainlink fence, and who clearly could not speak.

So I ended up seeing Purple Rain about 7 or 8 times that summer. It was a nice little routine. Plus, I really don't think I could ever get tired of watching Prince perform. Or, for that matter, watching Prince lean up against a wall... he is so SEXY.

This would always be on a weekday afternoon, so often the theatre was practially empty. Once I was in the audience with a big group of middle-aged black ladies. I think they may have been an official group on some sort of Church of Prince outing, they were all extremely enthusiastic about every little detail in the movie. Shriekingly enthusiastic.
"Oh my God, those boots!"
"Look at that -- he eats Doritos!!"
"Woo, that boy can DANCE!"
"And in those heels!!"
They were great. They glanced back at the silent girl sitting behind them a few times, but they didn't speak to me -- and I obviously didn't speak to them.

Eventually I got my jaw unwired and I could eat normally again. It was literally more than a decade before I could stand to look at clam chowder, but apparently my love of Coke knows no bounds.
at May 22, 2009 3 comments: