Since my husband is, as I have accurately stated before, a horror movie FREAK, I am in the fairly odd and (I would imagine) unique position of knowing a lot about horror movies without having ever seen them.

Okay, I've seen a few, mostly in trade-offs with Greg: I watched Texas Chainsaw Massacre and he watched Terms of Endearment, I watched Hellraiser and he watched Gone With The Wind, I went to see Grindhouse and he went to all the Harry Potter movies. I actually really liked the second half of Grindhouse, Quentin Tarantino's Death Proof, but pretty much suffered through the gory blood, pus and zombie filled Planet Terror.

One movie that my husband watched recently (and reviewed here) is August Underground. And I have to admit, while this movie is the definition of everything I don't want to see in a movie, I am fascinated by it.

It's supposed to look like the personal home video of a serial killer. From Greg's review: "This is not a horror movie. This is a hate movie. And even calling it a "movie" is like saying that huffing gas is "doing drugs". There is no plot. No story. Hell, there are really no characters. It's just the exploits of 2 nameless, violent thugs."

It's basically filmed with a single handheld movie camera (you never see the cameraman's face, but you hear him laugh frequently) following around a guy who tortures and murders a couple in his basement, robs a convenience store, goes to a metal concert, gets a tattoo, visits a prostitute. (I'm giving you an extremely cleaned-up summary; the movie is apparently almost nonstop blood, torture and degradation.)

The look of the film is completely real, it appears unrehearsed and, according to Greg, looks like a snuff film. Greg says in his review that if he were in someone's house and came across an unmarked videotape that had this "movie" on it, he would without question believe it was real and call the police.

It's made by Fred Vogel, who started a company called Toe Tag Pictures. Fred Vogel wrote, produced, starred in, and did the special-effects makeup for August Underground.

Here is he with my husband: 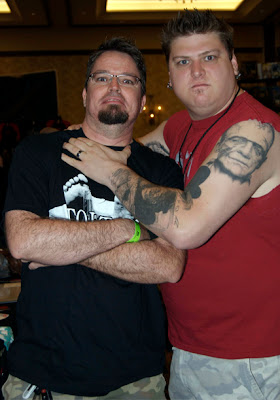 He looks like a creative guy, doesn't he? Heh.

I even had a dream last night about this movie. Greg was going to a screening in a small theatre, and while dropping him off I couldn't get away fast enough, I was afraid that I was going to end up seeing some of the movie.

Do you think I'm weird for being fascinated by a movie that I not only have no desire to see but actually would go far out of my way to avoid?